Hojo Pojo is a cute, fast, and clever little game about hot pot cooking that makes me happy and hungry at the same time!

Hojo Pojo is a deliciously-fun, family-friendly hot pot themed card game where up to 6 players try to cook and eat as much food as they can before the dipping sauce runs out! 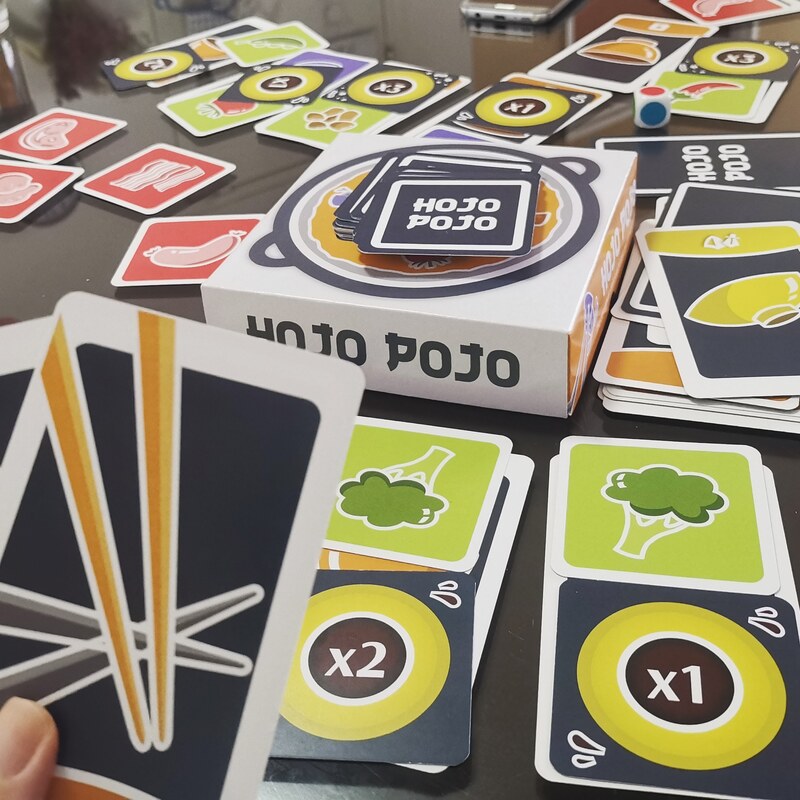 The rules and setup for Hojo Pojo are fast and simple, making this game an excellent option for families to play in the time it takes for a hot pot to boil!

Playing/Discarding Cards: Players begin the game with 3 cards from the action deck which consists of various action types. Some actions (e.g., regular and golden bowls, tongs, and slotted ladles) allow players to cook and eat ingredients while other actions (e.g., chopstick attack/defense, golden bowl covers, swap hands, pick a card, etc.) provide more direct player interaction. On a player’s turn, they may play or discard up to 3 cards from their hand. At the start of a player’s turn, they will always draw back up to 3. Thus, if another player uses their final card action to swap hands with another player, the player affected by this action is not left with an empty hand at the start of their next turn.

Cooking Ingredients: At the start of the game, the ingredients deck is placed in a facedown pile on top of the box lid which features artwork that resembles a hot pot of bubbling broth. Playing cards that feature tongs or a slotted ladle allows you to flip and move a number of ingredient cards from the deck to the table space surrounding the box lid. These ingredients are now considered to be cooked and ready for eating!

Eating Ingredients: Players will play cards from their hand featuring a bowl that requires 1-2 ingredients; the requirements is represented by the bowl’s color (i.e. golden bowls = 2 ingredients) as well as a color die icon at the bottom of the card. When a bowl card is played, the player will roll the die and assess the color result. If the color matches any cooked ingredient positioned around the hot pot, the player may select one matching ingredient and move it to their bowl card. If the color result does not match an available ingredient, the roll is forfeited. If after rolling (1-2x for a bowl), a bowl contains at least one ingredient, it is considered to be filled. The active player moves the top card of the dipping sauce deck to their completed bowl. These dipping sauce cards serve as end-game scoring modifiers as well as a variable game-length track (i.e. # of cards determined at setup with game end triggered as this deck runs out).

Game Variants: Included in this game are two variants to gameplay:

The theme for this game is unique and well-integrated into the gameplay mechanisms. I really enjoyed the visual aesthetic of this game. The illustrations are clean, colorful, and playful. The graphic design is also very well-done, clearly communicating the function of each action card.

As I mentioned before, the theme of this game did a nice job of informing the mechanisms at play. I particularly like the variants that Rayne Aw implemented (i.e. mega bowl chains and blind pot frenzy), highlighting the creative potential for this game’s super cute artwork through the addition of mechanisms like set collection and memory-based color matching. This game relies a bit heavily on luck with regards to the cards you draw and the colors you roll. I don’t consider this to be a design flaw as many family-weight games incorporate luck as a mitigating factor for younger players. In fact, I think the elements of luck aid in moving the game along at a nice pace that further compliments the experience. This game is a perfect pairing, both in theme and weight, with games like Sushi Go and Go Nuts for Donuts!

Check out Hojo Pojo on Kickstarter!