Let your imagination run free as you turn, twist, overlap and animate cloud cards in unlimited creative ways of communication.

DISCLAIMER: I was provided a copy of this game for the purposes of this review. Also, it is not my intention to detail every rule in the game, but rather to go through a general overview, how it plays and my reaction to it. If you’re interested in the game, be sure to grab a copy on their website.

The sky is your canvas! - 25th Century Games

How To Play Cloud Control

Shuffle and set out the cloud cards in a 4x4 grid in the center of the play area.

One person draws a word card and flips the timer. They then use the cloud cards in the center play area to craft shapes to illustrate the words on their card (there are 4 words). Other players try to guess each of the words. If they guess it correctly, you both earn points. There are options for 1 or 3 points, depending on how difficult the word is.

Game ends when everyone has gone through two rounds and a lightning round.

Cloud Control is a game with a box that makes you want to grab it off the shelf. The colors and cloud shapes on the box are really whimsical and makes you just feel like you’re having fun just by looking at it. This also extends to the theme of the game, drawing in clouds (a favorite of mine and I can stare at clouds all day), blue skies, and kite-flying into the illustration and pieces.

The game is incredibly simple to learn and very easy to get started with since a lot of the real play happens when your creativity gets to run wild. While playing we went through a whole slew of emotions - a tinge of overwhelm initially seeing the words and the clouds in front of us, a little frustration trying to put the pieces together in a coherent manner so people would guess the word correctly, jolts of excitement when someone finally guesses a word correctly and a lot of enjoyment in general as people tried to create different shapes and words.

For example, this was how the word “math” was created:

No, we didn’t correctly guess it, unfortunately!

With Cloud Control, it’s never ever boring for anyone playing since everyone is always involved in the game whether they are guessing the word or actively trying to piece together clouds to make guessable items.

As adults, it was a little difficult for the three of us to get comfortable with being creative with the pieces - we were frequently stuck doing the same three things for “human” - but I can absolutely see kids digging into the game without any preconceived ideas limiting their creation. 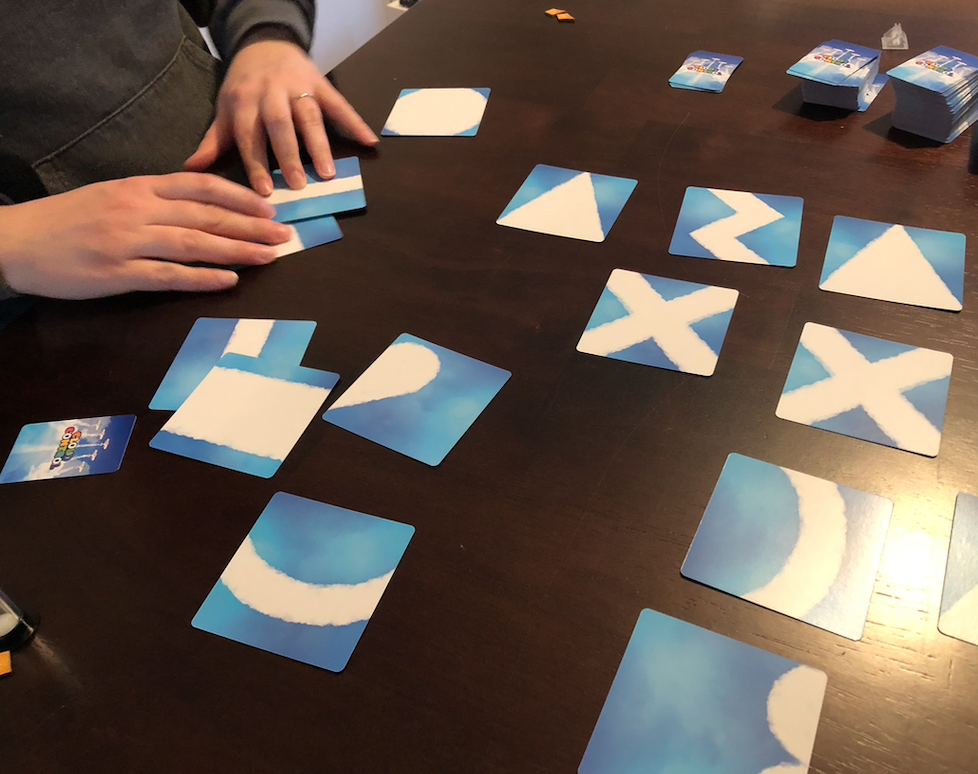 At three this game was enjoyable, but we all agreed that it is also one of those games that are definitely more fun with higher player counts since there’s more room for interaction. Similar to other higher player count family games (like Charades), there’s huge potential for house rules that will make the game unique amongst various families.

Since there are a lot of cards to choose from (and blank cards also included), replayability can be quite high. I can also see potential expansions being added too, with different themed cards (much like what Cards Against Humanity did with their themed cards) or additional cloud shapes, which can make the game even more entertaining for additional play.

Although the demo cat image looks really easy to create (see image below from their website), it was much more difficult in practice than we anticipated. 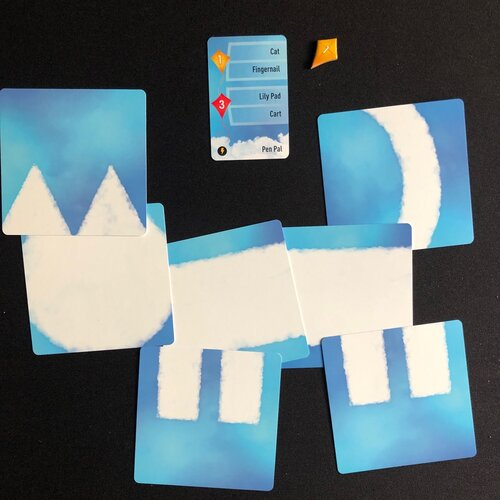 One of the best ones we had was ankle: 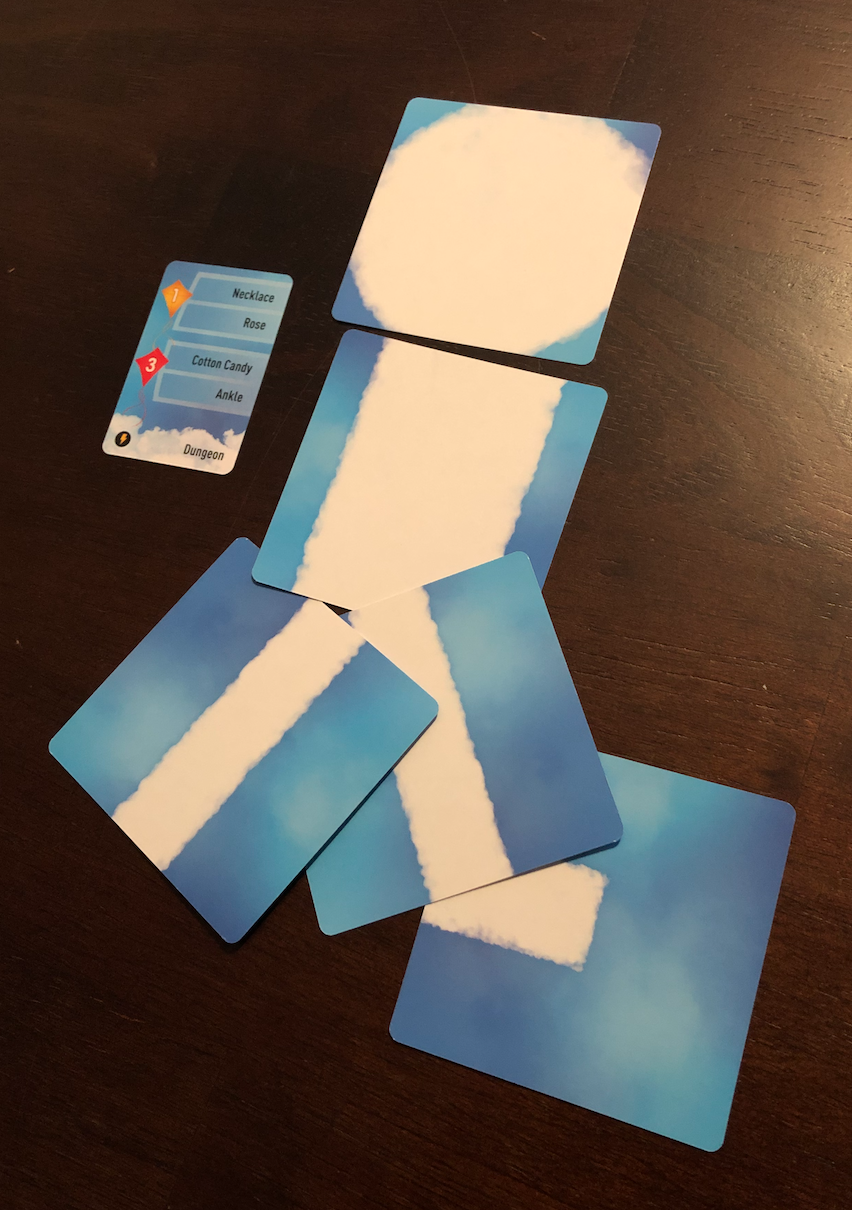 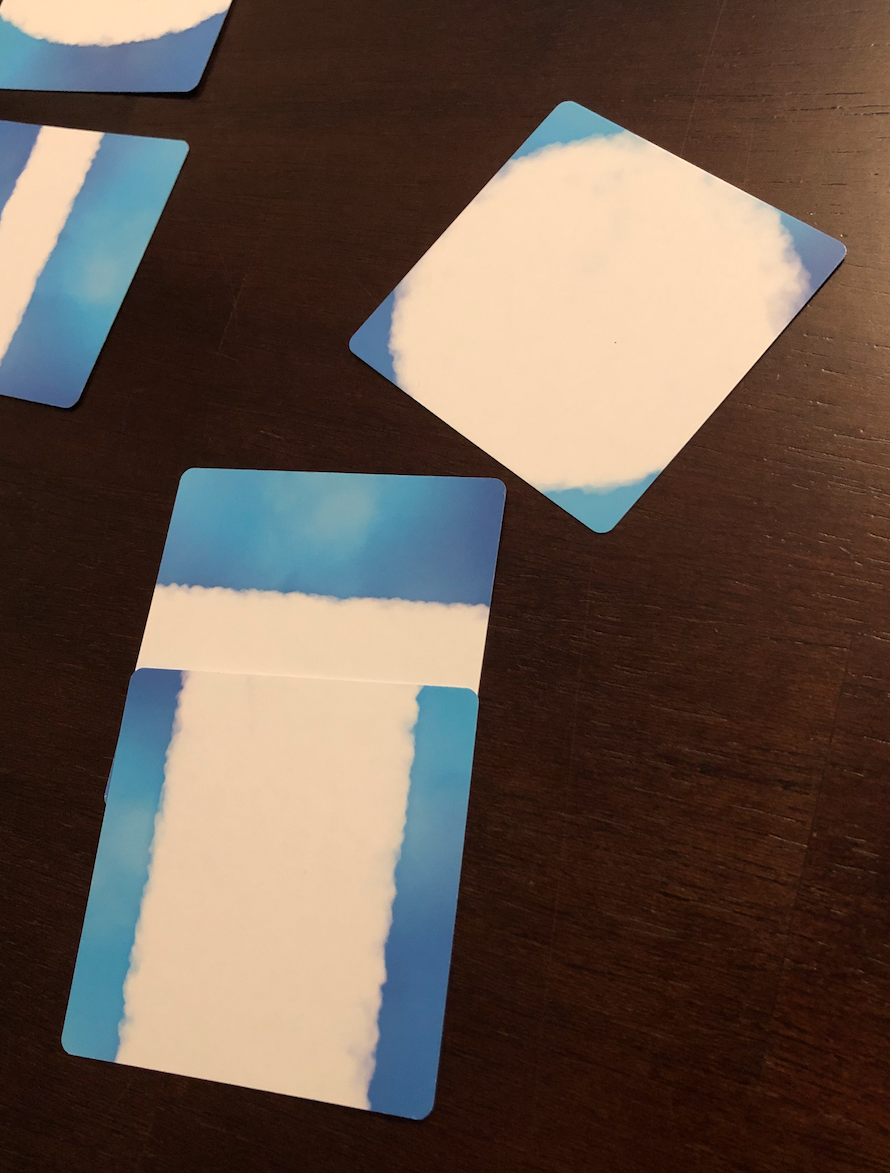 On one hand, it seemed like there were a lot of repeat cloud shapes, which was a little limiting at times and as adults we wanted more variety in the shapes. On the other hand, the repetitive shapes ended up being very useful in making different words. For example, without the repeat half equal sign (in the image above), it would have been tremendously difficult to create the legs for the cat.

Cloud Control is definitely a must-have for those with children. The way the game plays promotes a lot of creativity and thinking outside of the box as well as patience as people try to guess the creations. Those who enjoy high-player count party games like Dixit, Pictionary, Taboo or Charades will also like having Cloud Control in their repertoire! You can grab yourself a copy of it on the 25th Century Games website.