Palm Island is a 17-card game that is played over 8 rounds as you work on upgrading cards,  improving your available resources, and scoring as many points as possible.

Setup - The cards in Palm Island are shuffled, ensuring that all cards have the number in their top-left corner. Shuffling the deck creates a unique experience each time you play. Once shuffled, place the round tracker card at the back of the deck with the "1" right-side up and you are ready to play! 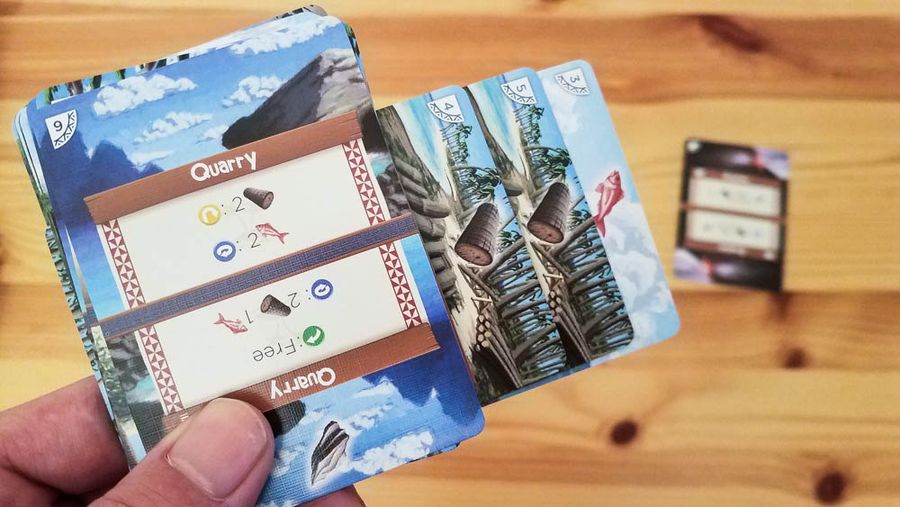 Solo Gameplay - Each turn consists of selecting an action from those available on the top edges of the first 2 cards in the deck. Often, this action involves moving the card to the back of the deck after flipping the card, rotating it 180 degree to upgrade, or rotating it 90 degrees to show that the card's resource(s) (e.g., fish, rock, and/or wood) have been reserved for later use. If no action can be taken, you simply move one of the top 2 cards to the back of the deck. As cards are flipped/rotated, victory points are revealed (i.e. star icon); these will be scored at game end. Once the round tracker card is revealed, all reserved resources are lost (i.e. rotated back into the deck). You continue to upgrade cards, improve resources, and reveal victory points until the round tracker card is revealed for the 8th and final time. Points are totaled and compared to the scoring chart within the rulebook.

2 Player Gameplay - When playing with a second player, there are various modes of gameplay: cooperative, casual competitive, and competitive speed. In Cooperative Mode, players have a series of disaster challenges they must overcome in the form of resource costs. To satisfy these, players play through a round independently but are encouraged to speak about what resources they can/will reserve. In Casual Competitive Mode, players ensure that their decks are arranged in the same fashion and compete to see who can upgrade and manage their deck in the most efficient way. Once the round ends, players can purchase outpost cards that provide additional benefits to your deck moving forward. The Competitive Speed Mode is similar to Casual Competitive mode with the player reaching the end of their personal deck first being given first pick of available outpost cards.

The artwork and graphic design for this game are great! Everything is clean and easy to understand, eliminating the need for referencing the rulebook after your first play.

One of the biggest selling points for Palm Island is its portability. Palm Island manages to create a quick but meaty hand-management game that does not require a tabletop surface to play. As a backer of the kickstarter edition, I opted for plastic cards which tend to be a bit too slippery for the way you are expected to hold the entire deck in one hand. This game is among my favorite solo games and, while I appreciate the designer's efforts to create a multiplayer experience, I think this game shines brightest as a solo experience.