Invasion of the Brood Review by Stephen

Invasion of the Brood Review

Main mechanic / Theme: Dudes on a board

WARNING: This is a preview of Invasion of the Brood. All components and rules are prototype and subject to change. 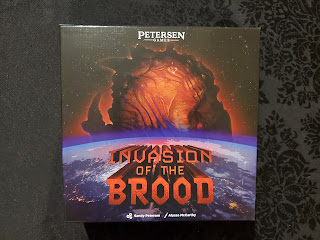 In Invasion of the Brood, The human race squares off against mind-controlling insects from outer space. There's a nefarious bug on the moon pooping larva all over this big, beautiful marble we call Earth. Will humans rally together to deal with the brain-worms or bicker until it's too late?
Gameplay and Mechanics:
This is a light strategy game with a cool theme. In a nutshell, you have dudes on a map, dice chucking, and a lot of variables to consider. You will either play as the humans or aliens. Each plays very differently. The humans win if they successfully build and launch six nukes at the moon. Their strategy is mostly about stalling and defending their nautical network. The bugs win if they control factories in six major countries. 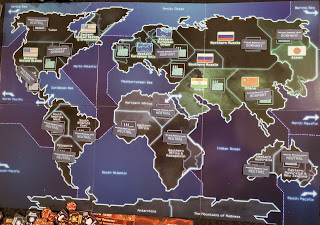 The map is unusually simple, almost like they asked a random third-grader at Walmart to draw a map and
label what they knew. Canada is labeled the Yukon, but the Mountains of Madness are on there.
The Human gameplay feels like a wobbly blob of resources. Your turn starts with the Awaken phase, where you will choose what country, if any, you want to try to convince there is an alien threat. You can do this politically or through military bullying. The political route requires you to give up some of your actions for that turn. Each country has a cost representing how readily they will join you. Each point of cost is paid by blocking one of your action segments with an X token. 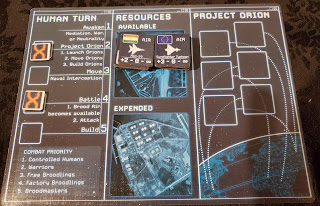 The war option lets you keep your actions, but you have to give Dupe tokens to the other player. Dupes can be spent to increase their number of actions on any future turn.

When you've swayed a major country, remove the "Dormant" token and place military the units shown on the reference card. This ends the Awaken phase. Now you go down the list and do whatever actions aren't blocked off in the order they are listed.
2A- Orions (nukes) in Antarctica launch (moves to the space on the right of your player mat.
2B- Orions move one space or across a network of ships.
2C- Build Orions in factories you control (in friendly countries).
In other words, you can't build, then move or move, then launch.
3- Move your units a number of spaces equal to their listed movement (the third number on the tile.)
4- Battle! Each of your units gets to attack somebody in the same space. Roll a die and hope it's less than or equal to the unit's attack value (the first number on the tile). Your airforce can be used two ways. Either add its attack value to the ground unit's attack, or it can airstrike by itself. Each unit gets one attack. They are all done separately. If it hits, the victim can defend by rolling equal to or less than its defense value (the second number on the tile). A hit unit that fails to defend is killed and returns to its owner's pool.
5- Each factory in a friendly country produces a military unit unless there is an Orion in its space. If there's a mega-nuke around, everybody is busy guarding it. The unit manufactured must bear the flag of the country that manufactured it (i.e., if there are no more American units, the American factories can't build.) Minor countries share a common pool.
Now, it's the Alien turn. 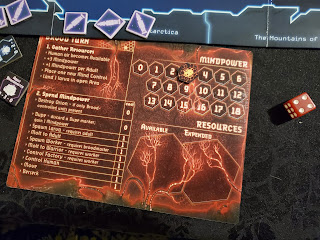 The bugs work on action points (mindpower). You have a base of 3 each turn +1 for every Broodmaster on the board. Points are spent to do actions. Unlike the Humans, these can be done in any order. First, you get to place one free larva anywhere on the map and mind control one unit. This can be very annoying for the humans because the bugs can easily take out their most valuable units before spending points. Part of Human setup is building a few units, but the bugs get to take one of them over in the first round.
Aliens come in four flavors.
Larva can evolve into Broodmasters.
Broodmasters can spawn larva in adjacent spaces or Workers in their own space.
Workers can either control a factory by moving into it or evolve into Warriors.
Warriors are the only alien unit that can move, and they're buff.
One of the best ways to cripple your opponent is to mind control their units. Why fight them when you can make them work for you? The only problem with this is that there are a finite number of mind control tokens.
Berserking is the more traditional form of attacking. A berserking unit attacks every human in its space then dies. Again you're trying to roll equal to or less than your attack value. Humans can roll defense.
If an Orion is unguarded, any alien unit can destroy it for free.
Overall, the factions are equally strong. It's hard to get the Humans going, but they are unstoppable once that network kicks in. The aliens are more adaptable and build steam faster.
Theme, Artwork, and Components:
The theme has a lot of nice touches like airstrikes and navel interceptions. There are a lot of strategic options for each faction. Every country is in a different spot, has different military capabilities, and requires different sacrifices to persuade each other nation to join them. All of the rules are logical, and therefore easy to remember.
The artwork was very basic, but this is a prototype. Components might change.

What I liked:
It's a fantastic concept for a two-player game. The factions are very asymmetrical, but each is so overpowered that it's "balanced."
What I didn't:
Rolling one battle at a time for a bunch of units + the opponent's defense roll for every hit drew things out longer than I would like. It can be tedious having to roll twenty attacks with seven defenses during the human battle phase.
The rules could be structured better for referencing.
It doesn't feel very streamlined. Some crunchy little details that enhance the theme also bog the gameplay down.
The art is very basic. 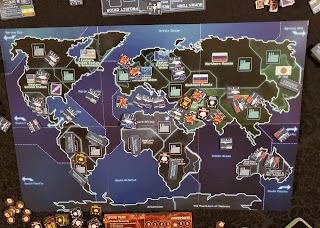 I hate Risk. This has a lot more going on, but it's still that kind of game. I couldn't get into it. I'm not a fan of swapping licks. This could be perfect for a couple who like Risk, though. It plays in about an hour, and it's light enough to pair with beer.
For Players Who Like:
Risk, dudes on a map, asymmetrical gameplay, 2-player games
About the Author: 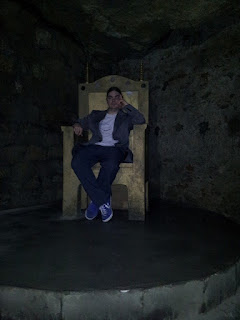