Nalin Chuapetcharasopon joins us as part of the Tabletop United Network and takes a look at Sovereign Chess.

DISCLAIMER: I was provided a copy of this game for the purposes of this review. Also, it is not my intention to detail every rule in the game, but rather to go through a general overview, how it plays and my reaction to it. If you’re interested in the game, be sure to grab a copy from their website.

How To Play Sovereign Chess

Set up the board according to the graphic within the rulebook. It is essentially the original chess setup, with many more pieces of varying colors placed around the board.

Most of the rules of chess apply, except for some movement rules that are specific to the 16x16 board: pieces can’t move more than 8 spaces, pawns move towards the brown horizontal and vertical lines running through the middle of the board and a few other minor tweaks.

I was anxiously waiting for this game to reach my doorstep because look, the board and the pieces look amazing on a table. 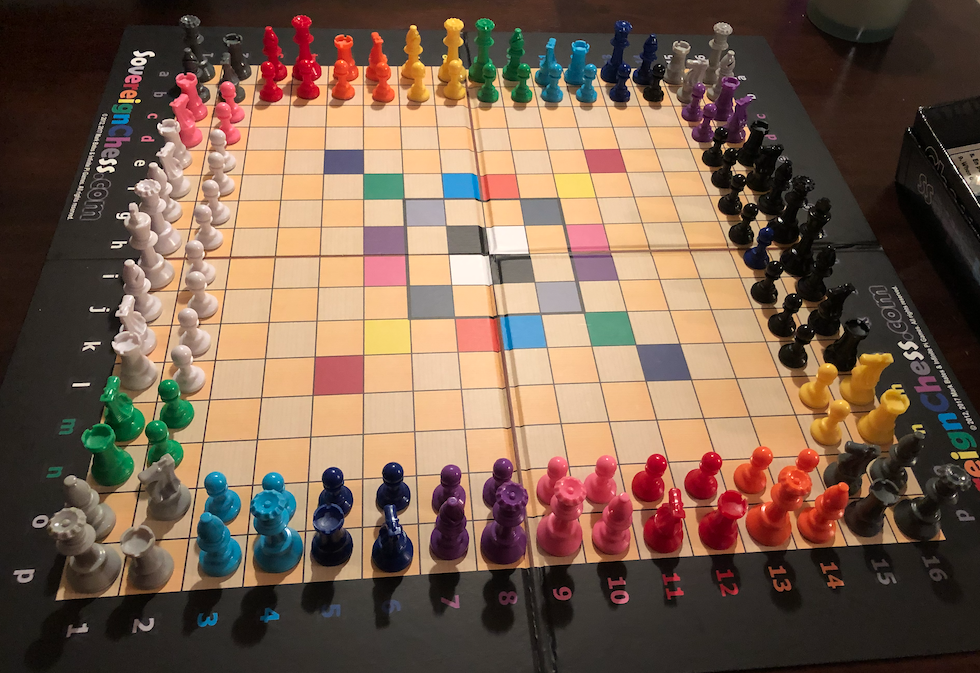 The table presence of the game alone made me want to keep it set up on the gaming table we have in the basement, just so I can sneak a look at it when I walk by. When we opened the box, we found the pieces inside were quite sturdy and well-made with felt on the underside of each piece for smooth and quiet movement across the board.

The rules written in the rulebook were easy enough to understand, but much more clear when reading through it on the Sovereign Chess website since there were a lot of examples provided for each rule.

With that out of the way, I’m happy to report that the game itself did not disappoint. On the contrary, it was much more thrilling than we originally anticipated. Since the board looked so grand, though, it was a little intimidating at first to get started with so many pieces. However, once we actually started playing it we were quickly swept up into it.

My wife and I both played chess as kids (yes, I was in the chess club at school #nerdlifeftw) and have very fond memories of it so we were afraid this game would somehow “tarnish” chess. Oh boy were we mistaken. Sovereign chess feels like the original game of chess, but adds a whole new dimension of strategy that we couldn’t have ever imagined.

In chess, you’re already looking to be strategic about your moves: creating commotion in one area of the board, while moving pieces elsewhere to activate a secret plan. In Sovereign Chess, you have the ability to do that, but at an even higher level because of the variety of pieces and colors that you can potentially control across the board. For example, you can cause a ruckus on one part of the board with your white and dark grey pieces, while you set up pink to really dominate your opponent.

One thing we both really liked about Sovereign Chess is the idea of flexibility. Since there’s always an opportunity to maneuver and control many colors, each player always had to be flexible since their colors were changing all the time. One minute my wife was playing as light blue, the next minute I captured her pawn standing on light blue and the entire light blue army came under my control. This ensured that we were always on high alert since moves and strategies can be rolled out in a much sneakier way than chess. 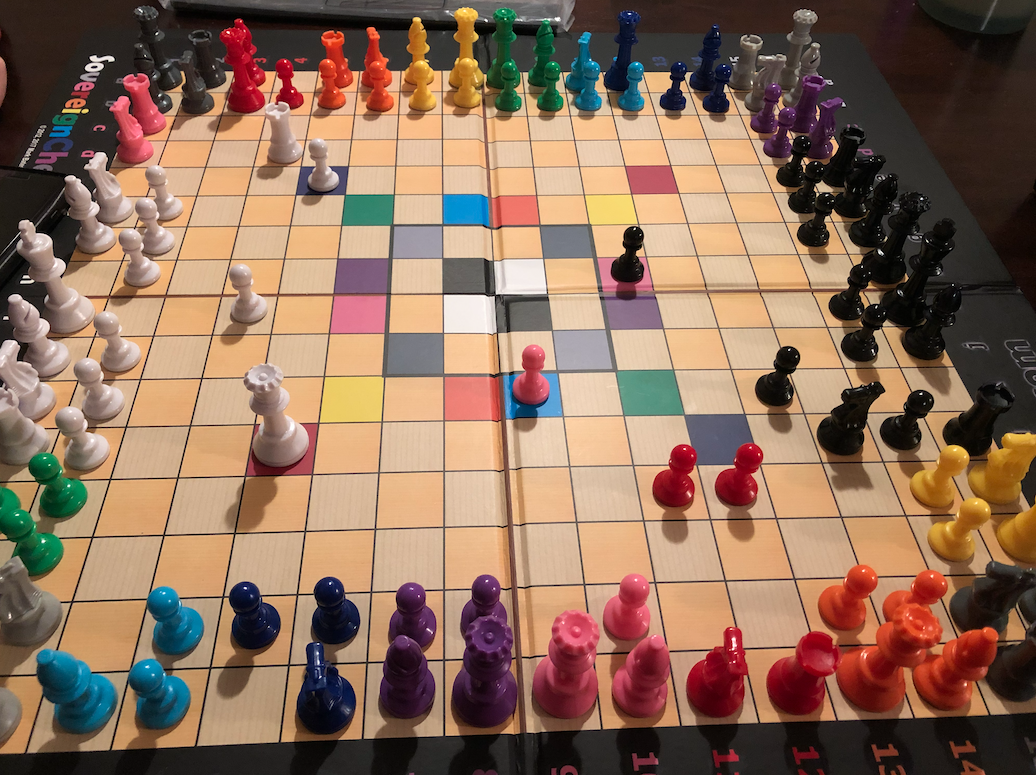 We initially didn’t think much about it, but the theme of Sovereign Chess is brilliant. Chess is like a battle, but Sovereign Chess is like war. In war, there are various nations involved, alliances can shift at the drop of a hat, you attack your opponents but never your allies, and nations can be close to or far from the opponent to set up different strategies for attack. Brilliant.

The initial setup was a little confusing since the imprint around the board wasn’t very clear. We originally thought that we had to closely follow the graphic on the rulebook, but later saw the board imprints. Once we saw that the actual printing around the board signifies which piece and color should be placed on a square, everything went much quicker.

Since colors were always changing we sometimes found it difficult to keep track of what pieces we were controlling and which pieces our opponent was controlling. It’s definitely part of the game to always be keeping track, but it was a little irksome at times to have to stop strategizing midway and say “wait, what colors do you control again?” What we ended up doing in this case was holding pieces in front of us corresponding to the color that we control.

Some of the pieces turn into very quick kills. For example, the Queen on p8 and p9 can quickly take each other out. We see that there isn’t much reason to do it since a Pawn can just wipe out the Queen who takes out the opposing one, but it is still there as a possibility.

All in all, Sovereign Chess is an incredible game that needs more attention (especially with the Queen’s Gambit miniseries making waves right now). It takes the Chess we all know and love and adds layers of complexity and depth to it. So much so that once we were done playing the first round, we quickly reset the board to play again.

Those who already appreciate chess will most definitely enjoy grabbing a copy of Sovereign Chess. The game will also be captivating for those who frequent traditional 2-player abstract strategy games (like Go) or more modern ones (like Ignis), which makes this one of the better games out there for people who want a “thinky” 2P game with quick and easy rules.