Sonora combines elements of dexterity and roll & write games in a satisfying puzzle that is chock-full of potential scoring combos! 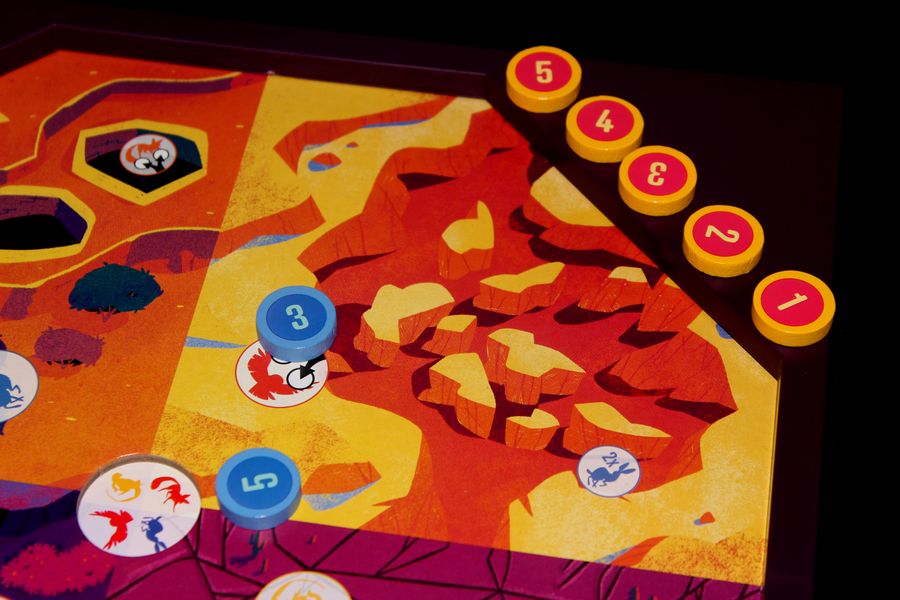 Each player receives 5 numbered discs (i.e. 1 to 5), a dry-erase player board, and a marker in their player color. On their turn, players flick 2 discs of their choice from their supply, aiming for specific sections (or bonus icons) on the board. On their 3rd and final turn of each round, each player flicks their 5th and final disc onto the board. Once all discs are in their final positions, the "write" phase of the round takes place. At this time, discs are resolved according to their values and position. Each section and bonus symbol corresponds with 1 of 4 mini-games presented on each player's personal board. 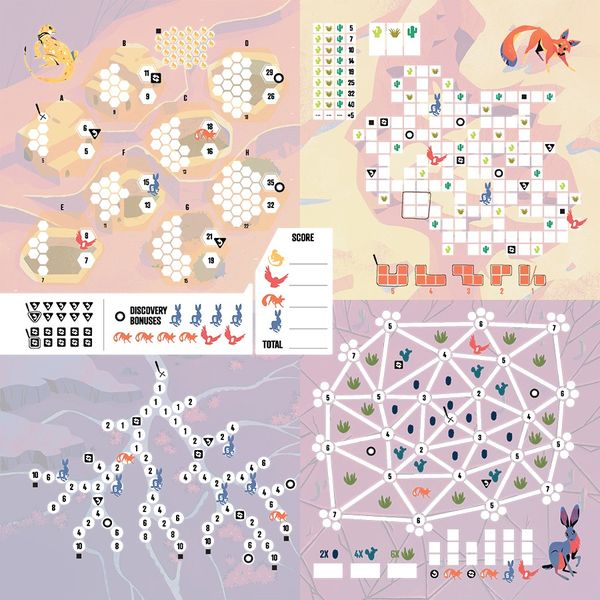 How each section of the player board scores is described below:

End of Game: Sonora allows players to dictate the length of gameplay (i.e. 5-7 rounds); however, I dare anyone to opt for a shorter game with so many point-scoring opportunities left on the table! Once the final "write" phase is complete, players total their scores for each of the 4 sections and the player with the most points wins! In case of ties, victory goes to the player with the most discovery bonuses circled.

As an early playtester, I remember this game being given a slightly different theme that I believe involved beetles and spiders. Regardless, the theme for this game could really have been just about anything and it would still be extremely engaging. The artwork is simplistic but effective, especially with its excellent use of a warm color pallete. The graphic design is also extremely well done considering the number of icons utilized. Players will likely need to reference the rulebook for their first or second playthrough as they encounter the various bonus icons; however, things should click after that, making the task of teaching the game to new players fairly straightforward.

This game has found an extremely nice balance between strategy and dexterity. Where your discs land is often determined by other players, flicking their discs violently into yours. At times, this can be a blessing but, more often than not, it's likely to lead to some fist-shaking at your opponents. The use of re-flick and swap actions to reposition your discs is very helpful but often overlooked (especially by new players). My favorite element of Sonora is the potential for combo chains. If you plan your moves just right, you could potentially score big points across all 4 sections in a single turn through the use of bonus icons found peppered throughout each section.

What can be Improved:

I've seen some mention of the need for a round tracker; however, the passing for the 1st player token adequately addresses this. If you're playing 5 rounds, the game ends after the person to the left of the original 1st player has had a full round as the 1st player. A member of our game group said that there didn't seem to be a ton of "tough choices" in Sonora because you can always do SOMETHING with the discs, regardless of where they land. This is not an issue for me personally as I don't need to feel stressed with every game I play!

Sonora is a beautiful game with an easy rule set and as satisfying blend of strategy and dexterity elements. It feels a bit like a perfect marriage between the flicking interaction of crokinole and the scoring combos of Ganz schön clever. Sonora is a game I will likely hold onto indefinitely and I highly recommend giving it a shot!